Best 1911 9mm Pistol For The Money And For Sale Reviews

You have run out of options, cornered in a dark alley three days after an electromagnetic pulse blasted the inner workings of every electronic device within 100 miles. Maneuvering, fleeing, reasoning, and diplomacy have all but fallen on the deaf ears of your would-be attackers.

You reach for the one thing that will now speak for you, a model 1911, whose racking slide speaks the international language of authority. It means back up, leave me alone, let me pass.

If not, it will blaze a trail of self-defense, leaving fist-sized holes in its wake. It is the 1911, one of the best examples of a handgun this country has ever offered.

The Colt Government Model 1911 has been the most respected combat handgun in the world for over 100 years. Like the Colt Single Action Army (SAA), the pistol has great emotional attachment, along with a strong sense of history, but unlike the SAA, the Government Model is still on the front lines.

The 1911 is currently more popular than ever, and the reason is an underlying excellence of design. The 1911 was a mature design when adopted by the US Army in 1911, as the pistol had been in development since 1898 or earlier. Longevity, versatility, and performance are hallmarks of John Moses Browning designs.

On times of trouble, where do you turn? The automatic pistol, caliber .45, model 1911, s.S.Army is, in my opinion, the best pistol for home defense and general-purpose use. You can trust the model 1911 with your life in any kind of survival situation; the gun will defend you with totally reliable, one-shot stopping power against any threat, human or otherwise. Here’s why.

Order your next firearm online at Cabelas.com and we'll ship it to your nearest Cabela's store for free!

Click here for a wide selection of 1911 parts and accessories available from Brownells.com!

All 1911 handguns on the market today are not Colt pistols. There are a number of excellent handguns based on the 1911 design, including Kimber, SIG, and Springfield. Others brands are made cheaply to sell inexpensively.

There is nothing wrong with a basic 1911 GI pistol as offered by Springfield Armory, but the potential for improvement is vast.

Because of this, the 1911 can be called the Mr. Potato Head of hand- guns. Sights, the slide lock safety, the beaver-tail safety, and grip panels may be easily changed, and internal parts may be modified by those with experience and certifications.

The 1911 is available in other calibers including the 9mm, .38 ACP Super, and 10mm, but the original chambering, the .45 Automatic Colt Pistol, remains most popular. In a steel frame 1911, the .45 ACP cartridge is easily controllable for those that practice.

It isn’t painful to fire and has a push that isn’t as abrupt as high velocity numbers. The balance between power and control is unequaled. There are currently claims that the small calibers are as effective, given “proper load selection,” which we have been told for over 30 years.

Until the laws of physics are changed, the .45 ACP will create a larger wound channel, let more blood out, and more air in.

Much criticism has been said that the old 1911s rattled when they were shook. I grew up firing GI 1911 .45s. These were not exactly the golden days because the collector’s items must have been in safes! These old guns sometimes had a Colt slide over an Ithaca frame, or a Remington frame and Colt slide but they always worked.

They fired every time. They rattled when shook hard but all were accurate enough to put five rounds into five or six inches at 25 yards. This would save your life.

The trigger action was heavy but reset was fast. They were perhaps the ideal trigger action for rapid combat work. The 1911 features a low bore axis. The center line of the bore is low over the hand. This limits muzzle flip. Trigger compression is straight to the rear and controllable.

The slide lock safety positively locks the action. The grip safety prevents the trigger from being pressed unless the grip safety is fully depressed. The grip or handle also fits most hands well. All controls are within easy reach of the average hand size. The pistol is faster to an accurate first shot than any other handgun, save perhaps the Browning High Power. However, the High Power is a 9mm.

Between the wars, Army gunsmiths developed the most accurate self-loading handgun ever fired. These hand-guns served in the National matches and quickly became legendary for accuracy and durability.

By welding up barrels and squeezing slides these soldiers greatly increased the potential of the 1911 .45. Colt introduced a factory version in The National Match or Gold Cup pistols are capable of two-inch groups at 25 yards with quality ammunition and sometimes much better.

The modern Springfield Loaded Model target model is in much the same category. Today most service grade 1911 handguns will group five rounds into three inches or so at 25 yards, although this is hardly a test of a fighting hand-gun.

A few 1911 handguns will also be exceptional as is the case with any machine requiring hand fitting. As an example, my personal Colt Commander XSE is more accurate than most Government Model pistols.

The Black Hills Ammunition 185 grain TAC +P will average two inches at 25 yards, excellent by any standard. What really counts is speed to the first shot, control during rapid fire, and results on multiple targets.

Nothing equals the performance of the 1911 in trained hands.

The 1911 isn’t old technology. The newest improvements in CNC machinery have been applied to the design in recent years. The modern 1911 is cutting edge. In the original U.S. Army testing, the Colt fired 6,000 rounds during the test program. It was fired until it was too hot to touch, then dunked in a bucket of water, and fired again.

Cleaned and oiled every 1,000 rounds, the pistol came through the test without a single malfunction. Modern 1911 handguns from Colt are even better. 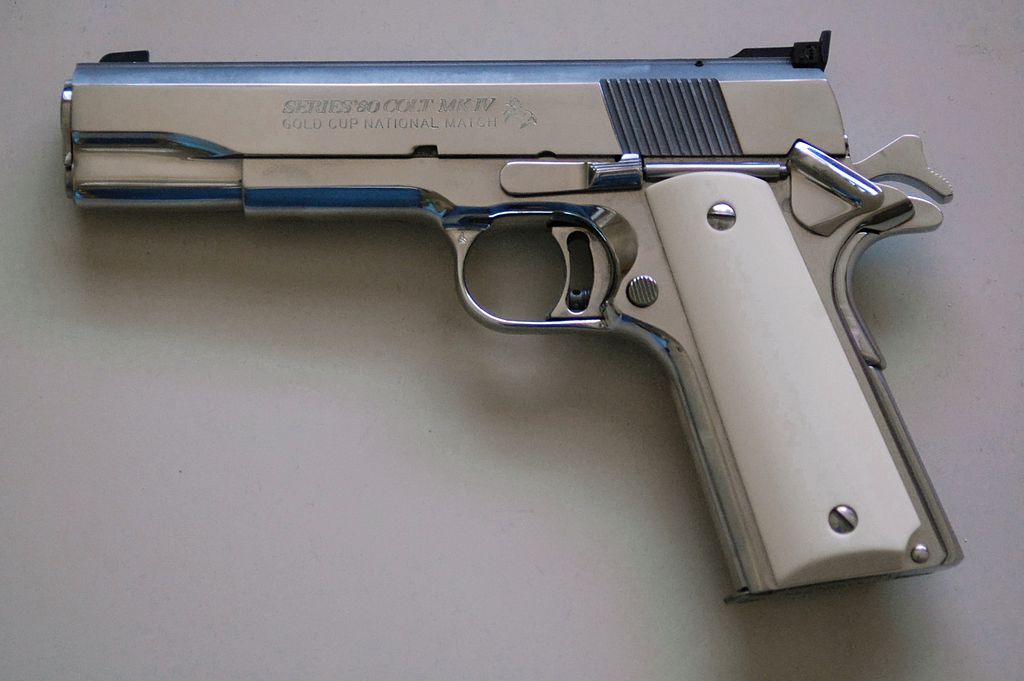 The 1911 needs to be cleaned and oiled but what machine doesn’t? Chosen on its ability to perform reliably and its speed into action, as well as wound potential, the 1911 is the best choice to stop a determined adversary.

The speedy second shot, ability to replenish the ammunition supplies quickly, hand fit, and human engineering, all are fight-winning advantages.

For those that are willing to practice — and that is the key — the 1911 offers a real advantage. A quality 1911 isn’t inexpensive but proficiency at arms is purchased with a different coin.

There are good reasons the 1911 is reliable and other reasons for a failure to feed. Quality magazines are a must. The feed lips control the attitude of the cartridge and must be properly bent and heat-treated. My pistols are presently loaded with Ed Brown magazines.

The cartridge functions best with a 1.250 OAL, as intended. It is hardly a criticism of the firearm if improper cartridges are used. A quality 1911 with service-grade magazines and ammunition is as reliable as any handgun, more reliable than most and more rugged than many.

As for accuracy, there are two components, intrinsic and practical. Locked into a machine rest, a handgun without sights and grips may be accuracy tested.

Perfect accuracy would be a 0.451-inch group. This will not happen past seven yards. Practical accuracy includes considerations such as the quality of the trigger compression and sight picture. A good tight modern 1911 will easily cut a three-inch, five-shot group at 25 yards from the bench. At 7 yards practically any 1911 and load will cut a single ragged hole.

The 1911 is a perfectly balanced combination of weight for steadiness and rapid fire – without an extra ounce more – a true one-hand pistol, able to be fired from either hand or one in each hand, as circumstances dictate. Recoil is just a light bounce in the hand and is easy for anyone to master.

Reliability is of maximum importance on any weapon that you’re staking your life on, and the 1911 has proven the most reliable pistol ever made in its more than 100 years of service. You often hear people say that revolvers are more reliable than automatics, but I have had far more malfunctions and parts breakage with revolvers than with automatics.

There’s one important thing to remember. The 1911’s reputation for reliability was made with the unaltered G.I. Version that was manufactured with plenty of room for the rust, sand and dirt of combat – not the tightened-up “accurized” guns that match shooters use.

Firepower is an often-misunderstood issue. Firepower is bullets hitting people, not aimlessly spraying lead in their direction. It’s very rare to need more than four shots in a gunfight. Dealing with mobs may require more, and the ability to rapidly reload with seven-shot magazines has saved the day for many a soldier who was on the receiving end of an enemy charge in the last 100 years.

This is one place you don’t want a revolver. Stopping power is everything when someone or something is trying to kill you. Nothing improves on the stopping power of the 230-grain full metal jacket g.I.

Load at 820 feet per second. It’s a one-shot stopper, designed to put an enemy cavalryman’s horse down with one shot, and it works equally well on moose and bears. On these big animals you want penetration, not expansion.

You already have a big enough bullet. Apartment dwellers wanting less penetration can avail themselves of a wide variety of hollow points.

These offer no increase in stopping power, despite what the salesman says, and they do give up the ability to shoot through walls to get at the intruder standing just beside the doorway you need to go through. That’s the price you pay for less penetration.

Safety is another issue. The 1911’s designer, John M. Browning, thought that the grip safety was all that the gun needed, and intended for it to be carried cocked with just the grip safety. The army insisted on a thumb safety, and the gun has been carried cocked with the thumb safety on for more than 100 years with an enviable safety record. Safety around children is always mentioned when we talk any about any kind of guns.

Hiding your guns and locking them up will take care of gun safety around children, until they can be taught the proper way to handle them.

The 1911, or specifically the M1911a1 – the WWII version – is the pistol that I use and trust. Every time I go to fire the gun, it always shoots accurate and true – and that makes the 1911 the best pistol for home defense or whatever you use it for. That should answer your question.

The M1911 is the most imitated handgun in the world. Its fundamental design is sound, and continues to dominate the firearms market. Today’s 1911 pistols are available in a variety of calibers and configurations – options are limited only by your imagination and budget. From basic entry-level guns all the way up to competition-ready race guns, the 1911 is the pistol of choice. Why? A 1911 is easy to shoot, almost as easy to upgrade, and can handle as much “horsepower” as you dare.